Tribute to the Hobby Artwork of Gretchen Oneail

It’s been about a year since Gretchen Oneail has passed away. I miss her all the time. I miss the sound of her voice, the way she said certain words. Her goofy jokes. The way she honestly and unabashedly cared about people. We have very few genuine allies in this world, which is why the loss of just one can be so devastating. I’ve had a difficult time writing some sort of tribute to Gretchen Oneail. Every time I’ve tried before now, I’ve zoomed off to another distraction, because to write this means that on a very real level I’d have to admit that one more person I loved, has now left. It’s especially tragic when the person was someone as vibrant and fun as Gretchen. Some folks in the hobby have met her at Breyerfest. That’s where I met her. I'm not sure of the year, it was probably 2009 or 2010. She was a social butterfly at the Clarion, and looked forward to her visit to Kentucky all year. Breyerfest is a huge and busy event. Many knew Gretchen only from these brief encounters, and through her model horse art work.
Trying to put together a retrospective of her work has been challenging, because she was working on a new web site when she passed. Because of this, I’ve done my best to document what I do know and can confirm. (Primarily, her Breyer work.)
Gretchen was especially well known for her painting of minis. She was a bit of a pioneer or “early adopter” in the model horse world, when it came to Micro paint jobs. Her Micro Mini paint jobs were considered some of the most elaborate of the time and they were often enhanced by entire scenes, sometimes containing elements such as resin water effects, tiny flowers, and mirrors used to create reflecting pools of water. Gretchen would sometimes embed details such as koi fish in the water or lily pads  into these miniature worlds. 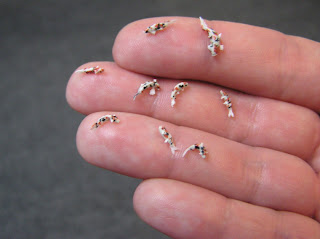 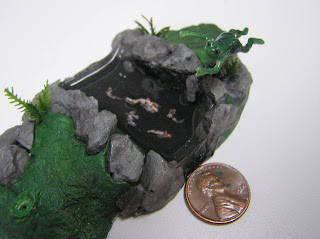 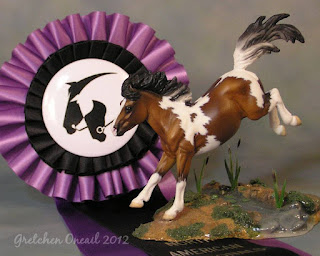 Gretchen was determined to show the mighty potential for mini sculptures. Her early micro painted models were some of the very first to win and place at shows early on, when the majority of extreme miniatures were overlooked.
If there is one thing that Gretchen would like to be remembered for, within the hobby, it would be for her contribution to advancing the acceptance of Minis and Micros in the model horse world. She was showing, and winning, early in the game when many wouldn’t even bother trying with such tiny sculptures, assuming that they would be overlooked by judges.
It frustrated Gretchen immensely when her health issues prevented her from creating, because she was worried folks would forget about her art when she wasn't able to paint new things, which is why I thought it was important to document some of her work here. Gretchen was still learning, and pushing herself to try new things and I have no doubt there was much more to see. It's a tragic shame that her chronic pain issues frequently prevented her from doing what brought her such joy.
Before her health became an obstacle, Gretchen also painted designs for The Peter Stone Factory. With her passing being so sudden, I didn’t have a chance to document her work there, but I know from chats we had while painting alongside her at the factory, that she designed many pinto patterns for Stone and also Decorator effects, certain “faux finish” gem colors, and some Holiday designs.
We had some very fun times painting at the Stone factory in the early 2010’s. I was amazed at the many tips and tricks that Gretchen had figured out. I jokingly called her the model horse hobby “MacGyver” because she was always figuring out new tricks, like taping micros to the top of golf tees to spray primer on them. She figured out her husband’s fish hook sharpener could fix the point of a bent airbrush needle. She was invaluable during my first visit to the Stone factory, I would have been lost without her.
Of her many tricks, she was especially proud of her technique for prepping pewter micro horses. Sometimes, these small metal sculptures needed a layer of gray primer to highlight where they needed sanding. However, multiple layers of primer would start to obscure details on the tiny sculptures. Gretchen would primer them in gray first, scrape and sand the seams, and then swish the tiny metal horses in acetone nail polish remover. A bit of a scrub with a toothbrush would get them clean again, and once they were entirely dry, shiny metal, the next day she’d spray on one clean layer of primer on the now seamless model. This left the detail intact, instead of buried under multiple layers of gooey paint. 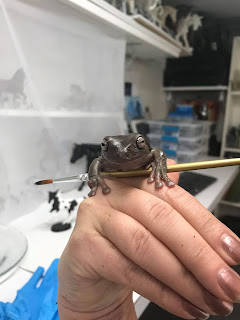 Studio Frog! She had frog pets. 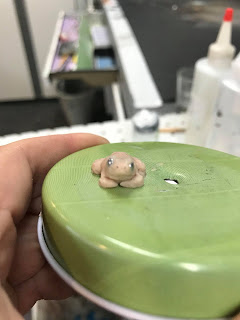 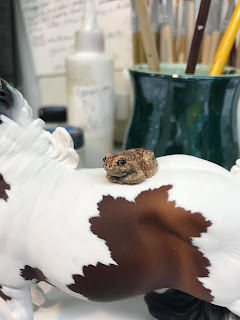 Sitting on her painted "Tadpole" resin 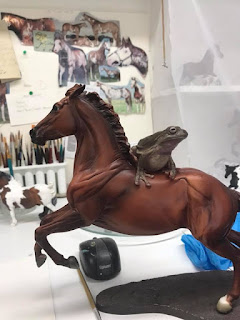 Frog Approved!
One of Gretchen's dreams was to do some design work for Breyer, and in 2014, she was chosen as a designer for Breyer’s Premier Collection, an Icelandic horse named “Falhofnir”. The next year, she painted “Hermosa and Corazon” #90173 Andalusian mare and foal, for Breyer’s 2015 Premier Collection. Gretchen was also asked to design several OOAK Auction models for Breyer. She found following the auction results very exciting! 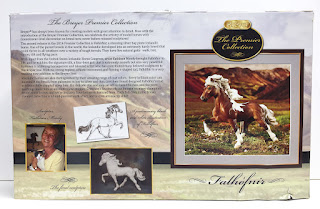 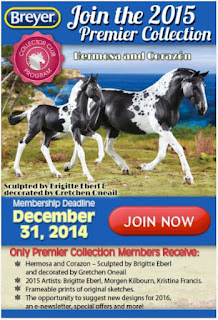 Gretchen was very bubbly and social, and she loved meeting new people, but Breyerfest is only a few days. She didn't want to interject herself too strongly into the gatherings of people she barely knew, yet the phrase I kept hearing on social media after her passing was “I wish I had had a chance to know her better.” I can confirm that Gretchen was indeed as sweet and funny as she seemed when folks briefly bumped into her. It wasn’t an act. She was as genuine as she appeared. 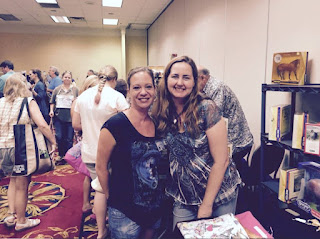 While Gretchen looked amazing in person, she didn’t want to “bring people down” by talking about her health issues publicly. If folks were unaware she was ever having any struggles, it simply means she did a great job on keeping it hidden from view. I won’t go into the details of these particular things, in Gretchen’s case, as this is not the point of this post, but I did want to share a bit about her artwork for the folks in the hobby who cared about her. Just know that she struggled far more than she ever let on to the public.

Losing Gretchen so suddenly, so unexpectedly, came as a shock to so many of us. She was the type of person to always want to comfort people, and ironically, as I mourn her passing, I know she’s the one who would do the best job at making us feel better, if she was here today.

If you want to get to know Gretchen, thanks to social media she’s left some clues for those of you who weren’t lucky enough to have had a chance to meet her in person. Her old Pinterest pages show a little peek into her mind, and to the surprise of nobody who knew her, are filled with all kinds of cute and lovely things, from beautiful horses to ocean creatures, flowers and frogs. She loved nature, cute animals, silly jokes and puns.

https://www.pinterest.com/paintedclover/_saved/ is her “general” Pinterest page (and among all that is a tiny section that shows her artwork - Gretchen was humble that way.)

This Pinterest link has some of her artwork featured, and she also has a studio page on Facebook:

Things posted online have a tendency to "poof" after a while, so it's good to document what you can while you can. Hopefully I can come back to this Blog post - or write a new one -a bit more of a comprehensive record of her work at some point, especially her work for Stone.

I really wanted to get something posted, however, as it’s been far too long, and it felt very important that I put out some sort of tribute to her art, however flawed it may be. Obviously, with something this sudden, creating a memorial wasn't expected. Hopefully I can update later with more photos and information on some of her beautiful designs. 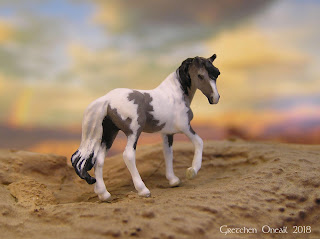 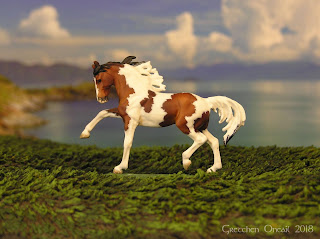 Oh - and one more thing. About the sea slugs.

Sometime around late 2019, I was talking to Gretchen, and I told her that I was taking a few days off from horses to paint and draw - sea slugs. Yes, sea slugs. I had this crazy idea to sculpt a giant sea slug. A sea slug that you can sit upon. (About the size of a loveseat, is what I described.) In real life, these guys are teeny tiny - so small they can fit on your pinky nail. But if you look closer, they have these amazing wild colors and crazy shapes. Sea slugs (or nudibranchs) kind of fly under the radar of a lot of nature lovers, due to their small size. What if you could "meet" a sea slug - face to face? What would be the impact of seeing one scaled up to the size of a pony?

Gretchen was 100% in support of this idea. (She was the only one, everyone else thought I was nuts.) Gretchen started posting sea slugs on Facebook. Every day. I thought to myself, I can’t wait to get this sculpture done, so that someday I can take a photo of my goofy friend Gretchen sitting on top of a giant neon nudibranch. When this stupid pandemic is over, and she finally comes to visit, it will be the most hilarious thing ever. 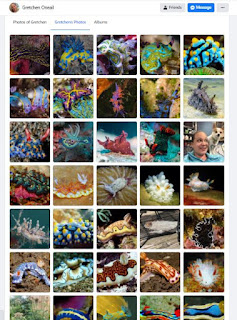 Shortly before her passing Gretchen and I were talking about getting scuba certified. Our post pandemic dream trip was to find somewhere to dive. Maybe find sea slugs in real life. She had suggested scuba diving in Florida, and I told her why stop there? Let’s find the most exotic diving spot with the wildest nudibranchs, even if it was halfway around the globe. She was stuck in bed, not feeling well. I was hoping that maybe it would give her something fun to think about.

I still wish I had done so much more to be there for her, when she needed me most. You always believe that there’s more time to spend with the people you love, and then suddenly, it’s too late.

I hope everyone finds someone who believes in them as much as Gretchen believed in me. The kind of friend who supports even your bizarre and nonsensical dreams. Miss you a lot, Gretchen, and thanks for the sea slugs. You really got me. 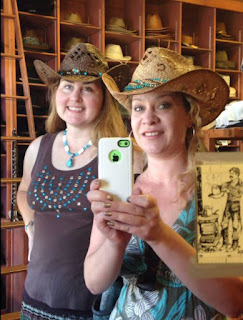